Dr. Manoj Joshi is a Distinguished Fellow at the Observer Research Foundation, India’s leading think tank. He is a journalist who has specialized in security issues and has worked with The Times of India, The Hindu, the Hindustan Times, and the India Today Group. He remains a regular columnist and commentator in the Indian, and occasionally foreign, media.

He has been a member of India’s National Security Advisory Board. Between 2011 and 2012, he was a member of a Government of India Task Force on National Security, chaired by Mr. Naresh Chandra, to propose holistic reforms in the national security system of the country.

He has authored two books on Kashmir, as well as several papers and chapters in scholarly works on South and Southeast Asia. His book on the Sino–Indian border issue is expected to be published in April 2022.

He has a doctorate from the School of International Studies Jawaharlal Nehru University and has held visiting appointments at several universities. He is a regular speaker at defense institutions in India, as well as think tanks both in India and abroad. Currently, he also teaches a course on Defence and Strategic Issues at the Asian School of Journalism, Chennai. 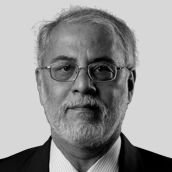