Colin Murdoch is an Ambassador for Antigua and Barbuda and holds the position of Permanent Secretary for the Ministry of Foreign Affairs, International Trade and Immigration for the Government of Antigua and Barbuda. Since completing his Masters from the Fletcher School of Law at Tuft University in the USA, he has served as the Permanent Secretary of the Ministry of Trade, Industry and Commerce from 2009-2014, and continues to serve as the Antigua and Barbuda Permanent Representative to the World Trade Organization. Prior to that he served as Senior Foreign Services Officer for the Ministry of Foreign Affairs and was also the Ambassador to Cuba from 1997-2004. Colin Murdoch also won the Most Outstanding Civil Servant Prime Minister’s Award in 2013. 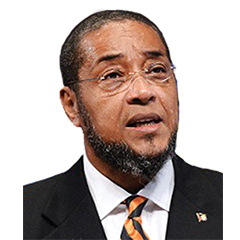