Dimitry Afanasiev is Chairman and co-founding partner of Egorov Puginsky Afanasiev & Partners, the largest law firm in Russia and the CIS.

Mr. Afanasiev specializes in international corporate transactions, dispute resolution and public policy issues. He has represented the interests of the Russian Federation and leading multinational and Russian corporations. He is a board member of UC RUSAL, the world's largest aluminium company.

Dimitry was named European Managing Partner of the Year at The Lawyer European Awards 2015.  In 2010 - Financial Times listed Dimitry among the 10 most innovative lawyers in the world. In 2011 the “Russian Reporter” listed Dimitry in the top 10 of the most respected lawyers in Russia. He is recommended by Chambers Global, Chambers Europe, Legal 500 EMEA, IFLR 1000, Best Lawyers, Who’s Who Legal: CIS and other leading legal guides as a leading practitioner in the areas of M&A and corporate law, dispute resolution, antitrust, banking and finance, investment, and restructuring/insolvency.

Prior to co-founding Egorov Puginsky Afanasiev & Partners in 1993, Dimitry worked at Schnader, Harrison, Segal & Lewis and Wolf, Block, Schorr & Solis-Cohen in Philadelphia (USA). In 1999 he became Chairman of Egorov Puginsky Afanasiev & Partners. He was a board member at MMC Norilsk Nickel in 2009 and at CTC Media Inc. between 2011 and 2012.
Dimitry is a board member of Business Russia, an all-Russia public organization, a founding member of the Russian-American Business Council, a member of Expert Council under the Presidential Commissioner for Entrepreneurs' Rights, and a member of the Russian Council for International Affairs, a foreign policy body established by the Russian President. He is Chair of the Non-Profit Partnership for Advancement of Corporate Law, and a member of Competition Support Association.

Dimitry is a Co-Chairman of the CIS Leading Counsel Network, a professional network of the leading law firms across the CIS offering clients integrated multijurisdictional legal advice.

Dimitry was awarded a medal for Professional Excellence by the Federal Chamber of Lawyers and received сommendation from the President of Russia for achievements in defending human rights and for active work on protecting the interests of the Russian Federation. 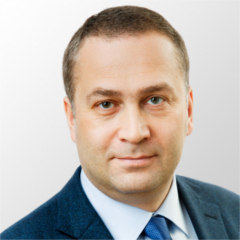