Dr. Delores Stapleton Harris is a member of the International Golden Key Society and an OAS Scholar. She currently holds the position of Permanent Secretary in the Ministry of Health for the Federation of St Kitts and Nevis, after obtaining a doctoral degree from Walden University in Leadership and Policy. Formerly, she was a Nurse Educator and Lecturer in Health Sciences at the country’s main tertiary institution, the Clarence Fitzroy Bryant College, St Kitts and Nevis, having acquired a Bachelor of Science Degree in Nursing from the University of the West Indies.  She later obtained a Master’s Degree in Education Administration from the University of the Virgin Islands and in 2012 became the first person to be appointed Vice President, Academic and Students Affairs at the Clarence Fitzroy Bryant College where she acted as president in his or her absence. She possesses a vast repertoire of experiences and leadership expertise and her skillset has been honed over the years from the positions she has held and the diversity of committees she has served on. 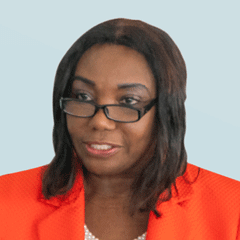