H.E. Edi Rama is a politician, artist, and writer who is serving his second term as the 33rd Prime Minister of the Republic of Albania. He has led the Socialist Party of Albania since 2005 and began his career in politics serving as Minister of Culture, Youth, and Sports from 1998 to 2000. H. E. Rama was the mayor of capital city Tirana from 2000 to 2011 before leading a coalition of socialist and left-wing parties to win the June 2013 parliamentary election, defeating the conservative bloc of Prime Minister Sali Berisha. 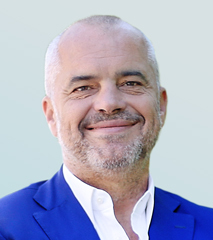