The Hon. Gaston Browne is the 4th and current Prime Minister of Antigua and Barbuda, in office since 2014. He led the Antigua Labour Party to victory in the June 2014 general election. Browne was appointed to the position of Commercial Banking Manager in the Swiss American Banking Group in Antigua and Barbuda. In 1999, he was duly appointed as the Parliamentary Representative for the Constituency of St. John’s City West. His outstanding dedication and commitment to service and distinguished credentials in the field of finance propelled him to the portfolio of Minister of Planning, Trade, Industry, Commerce, and Public Service Affairs in his very first term as an MP. Gaston attended the City Banking College in the UK, where he gained a first degree in banking and later pursued studies at the University of Manchester, earning an MBA in Finance. 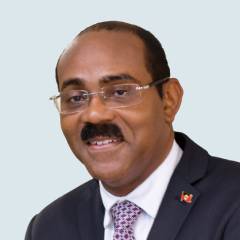