After serving as BBC North America Editor, Justin Webb joined the team of presenters on Radio 4’s influential Today programme. He now interviews the great and the good and those making the day’s headlines - alongside John Humphrys, Mishal Husain, Sarah Montague and Nick Robinson.

In the US Justin covered all the twists and turns of the 2008 Presidential election which saw a little-known Illinois senator become the country’s first black Commander-in-Chief. Justin continues to observe the American political, social and economic climate, assessing the often dramatic events on Capitol Hill, Wall Street and Main Street. As well as becoming a senior member of the White House press pack, he was the first British journalist to be granted a full television interview with President Obama.

Prior to his Washington posting Justin reported from Brussels as the BBC’s European Correspondent. He has also covered elections in Australia, a coup in the Maldives and Mafia trials in Italy. And as well as various overseas postings, he has anchored Breakfast News and The World Tonight.

Justin now spends his mornings grilling British politicians and news-makers on the agenda-setting Radio 4 programme. He’s also an extremely assured conference chair and awards host, and a wonderfully engaging speaker. After dinner he uncovers the truth about America and Americans (as in his books Have A Nice Day and Notes on Them and Us) – and has great fun demonstrating some of the differences in interviewing styles between ‘Old’ and ‘New World’ journalists. 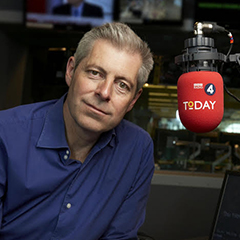