President Milo Đukanović was named President of Montenegro on 20 May 2018. Having been elected as Prime Minister of Montenegro in 1991 at the age of 29, and becoming the youngest prime minister in Europe, he fulfilled this role until November 2016. He was elected President of the Democratic Party of Socialists in 1998, holding this position until 2002, and was the leader of the Bloc for Independent Montenegro. Under his leadership, the citizens of Montenegro, in a referendum held on 21 May 2006, made a historic decision regarding the renewal of Montenegrin independence. 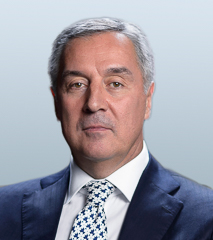