The Hon. Dr. Joseph Muscat graduated with a Doctor of Philosophy in Management Research from the University of Bristol in the UK. He was elected as a member of the National Executive of the Partit Laburista at the age of 21 and later nominated as Education Secretary of the Party. He successfully contested the first European Parliamentary elections in Malta in 2004. In June 2008, he was elected as the leader of the Partit Laburista. Dr. Muscat took office as Prime Minister of Malta on 11 March 2013. 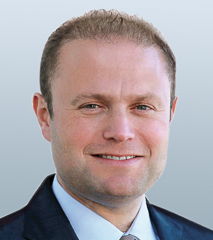