The Hon. Peter Charles David is Minister for Foreign Affairs and Labor in Grenada. After the 1999 general elections, he qualified as a barrister-at-law and continued his political career. He has been a member of the House of Representatives from the town of St. Georges and served as the Deputy General Secretary of the New National Party. He was the Minister of Foreign Affairs from July 2008 to November 2010 and subsequently served as Minister of Tourism until April 2012. 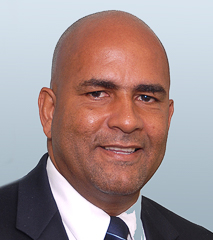