Claude Nicollier was born in Vevey, Switzerland, graduating from Gymnase de Lausanne (high school), Lausanne, Switzerland, in 1962; received a bachelor of science in physics from the University of Lausanne in 1970 and a master of science degree in astrophysics from the University of Geneva in 1975. Also graduated as a Swiss Air Force pilot in 1966, an airline pilot in 1974, and a test pilot in 1988 (Empire Test Pilot’s School, Boscombe Down, United Kingdom).
From 1970 to 1973, Nicollier worked as a graduate scientist with the Institute of Astronomy at Lausanne University and at the Geneva Observatory. He then joined the Swiss Air Transport School in Zurich and was assigned as a DC-9 pilot for Swissair, concurrently participating part-time in research activities of the Geneva Observatory. At the end of 1976 he accepted a Fellowship at the European Space Agency’s (ESA) Space Science Department at Noordwijk, Netherlands, where he worked as a research scientist in various airborne infrared astronomy programs. In July 1978 he was selected by ESA as a member of the first group of European astronauts. Under agreement between ESA and NASA he joined the NASA astronaut candidates selected in May 1980 for astronaut training as a mission specialist.

His technical assignments in the Astronaut Office have included flight software verification in the Shuttle Avionics Integration Laboratory (SAIL), participation in the development of retrieval techniques for the Tethered Satellite System (TSS), Remote Manipulator System (RMS), and International Space Station (ISS) robotics support. From the Spring of 1996 to the end of 1998, he was Head of the Astronaut Office Robotics Branch. From the year 2000 to date, he was assigned to the Astronaut Office EVA (Extravehicular Activity) Branch, while maintaining a position as Lead ESA astronaut in Houston.

He is married to Susana Perez of Monterrey, Mexico. They have two daughters, Maya and Marina. He enjoys mountain climbing, flying, and photography. His father, Georges Nicollier, resides in La Tour-de-Peilz, Switzerland.
He is member of the Swiss Astronomical Society, the Astronomical Society of the Pacific, the Swiss Air Force Officers Society (AVIA), and the Swiss Academy of Engineering Sciences and fellow of the British Interplanetary Society. He is also an honorary member of the Swiss Aero Club, and the Swiss Society of Engineers and Architects.

Nicollier holds a commission as captain in the Swiss Air Force. He has logged 5,600 hours flying time including 4,000 hours in jet aircraft. 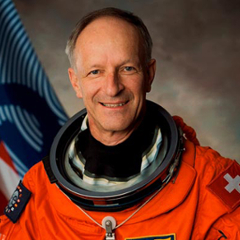