Premium Passports Lose Their Shine in a Post-Pandemic World

As parts of the globe cautiously begin to open up, the focus is on what travel freedom and global mobility will look like in a post–Covid-19 world. Last week the EU released a list of countries whose residents would be allowed entry into the bloc from 1 July based on coronavirus-related health and safety criteria. Included on the welcome list are countries such as Australia, Canada, Japan, and South Korea that traditionally score highly on the Henley Passport Index — the original ranking of all the world's passports according to the number of destinations their holders can access without a prior visa. However, in a move perceived as a stinging rebuke for its poor handling of the pandemic, the US was notably excluded from the list, as were Brazil and Russia.

Although not reflected in the latest ranking, which does not take temporary travel bans into account, it is eye-opening to consider what travel freedom currently looks like for the holders of once-prestigious passports. For instance, before Covid-19 the US passport usually ranked within the top 10 on the Henley Passport Index in 6th or 7th place, with its citizens able to access 185 destinations around the world without requiring a visa in advance. However, under the current EU ban, the picture looks starkly different. US nationals now have roughly the same level of travel freedom as citizens of Uruguay (included on the EU's list of welcome countries), which ranks 28th on the index, with a visa-free/visa-on-arrival score of 153. In another striking inversion, the US's dramatic decline in passport power means that Americans find themselves with a similar level of travel freedom usually available to citizens of Mexico (25th on the index, with a score of 159), current travel bans notwithstanding, albeit temporarily.

This is one of many extraordinary shifts in passport power caused by the temporary pandemic-related bans. Brazilian passport holders, for example, find their passport strength greatly diminished. The country usually ranks highly on the index — most recently placed 19th, with a visa-free/visa-on-arrival score of 170 — but the loss of access to the EU means Brazilians currently have roughly the same extent of travel freedom as citizens of Paraguay (36th on the index, with a score of 142). 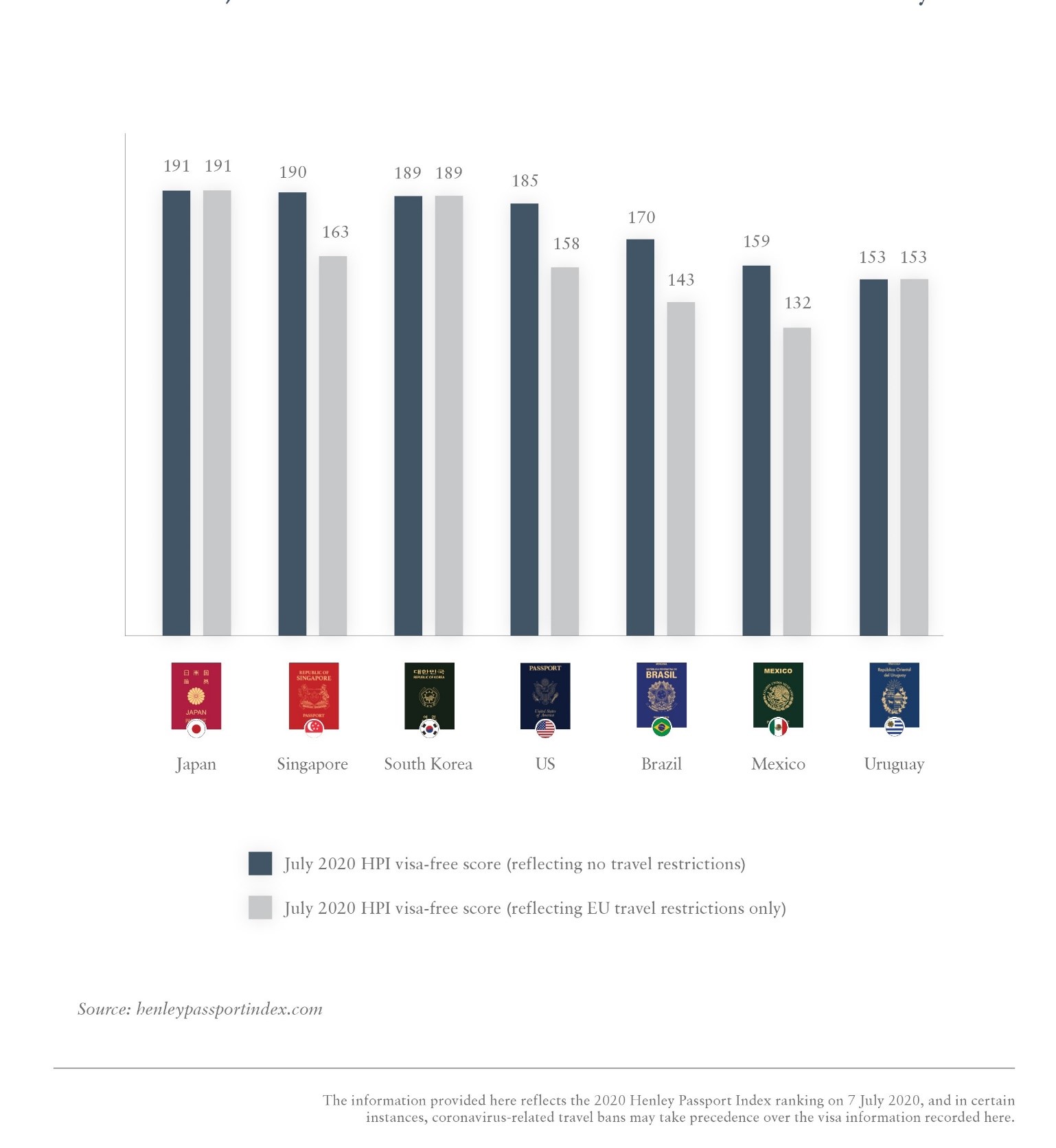 Without taking the various travel bans and restrictions into account, Japan continues to hold the number one spot on the Henley Passport Index with a score of 191. Singapore remains in 2nd place with a score of 190, while Germany and South Korea are in joint-3rd place, each with a score of 189. Both Japan and South Korea have been included on the EU's list of 'safe' countries, while Singapore has been excluded, which means Singaporean passport holders currently have far less travel freedom than their closest competitors on the index, which is based on exclusive data from the International Air Transport Association (IATA).

Dr. Christian H. Kaelin, Chairman of investment migration firm Henley & Partners and the inventor of the passport index concept, says the EU's recent decision will have far reaching effects. "As we have already seen, the pandemic's impact on travel freedom has been more drastic and long lasting than initially anticipated. This latest decision by the EU indicates that there is more upheaval to come. Look at the US passport, for example — in 2014, it held the number one spot in the world on our index, but US nationals currently have far less travel freedom than most citizens of other wealthy, industrialized nations and even of some less developed nations, being effectively locked out of Europe. We see an emergence of a new global hierarchy in terms of mobility, with countries that have effectively managed the pandemic taking the lead, and countries that have handled it poorly falling behind."

While the US looks set to be significantly affected by the EU's latest decision, it has issued stringent immigration controls of its own over the past few months. Greg Lindsay, Director of Applied Research at NewCities, says that the Trump administration's temporary suspension of all work visas will have far-reaching effects. "The executive order, signed on the 22 June, will bar as many as 525,000 foreign workers from entering the country for the rest of the year." As Lindsay points out, this decision is only the latest salvo in White House aide Stephen Miller's years-long campaign to curtail worker visas, arguing that they harm employment prospects for Americans.

In the UK, the pandemic's effect on mobility has also been severe. Robert McNeil, Deputy Director of the Migration Observatory at the University of Oxford, says that the almost complete cessation of international arrivals into the country has generated serious challenges for industries that have become dependent on seasonal migrant workers from the EU. McNeil says that despite public attitudes around immigration softening, the Brexit process has not slowed down. "In May, the government pushed through the new Immigration Bill, paving the way for a new 'points-based' immigration system. The new restrictions would prevent many people from becoming key workers in the UK in future. Around half of the EU citizens currently in key worker positions in the UK would not meet the new salary and skills thresholds required to move to the country from 2021."

Changing priorities in a transformed world

As premium passports lose their shine in a post-Covid world, experts suggest that the crisis is likely to make international mobility more restricted and unpredictable in the longer term. "Even as countries open their borders, it is expected that numerous governments will use epidemiological concerns as a justification for imposing new immigration restrictions and nationality-targeted travel bans that will mainly be aimed at citizens of developing countries," says Prof. Dr. Yossi Harpaz, Assistant Professor of Sociology at Tel Aviv University. Noting the recent decision by the EU with respect to the US and other countries, Harpaz says, "The passports of both developing and developed nations stand to decrease in value, at least temporarily. In such uncertain times, global demand for dual citizenship and investor visas is expected to increase."

Discussing the impact of the pandemic on global migration trends, Charles Phillips, researcher and consultant for Oxford Business Group, suggests that environmental health concerns could become a priority for those seeking alternative residence or citizenship. "We can expect places that are governed well and better equipped to deal with pandemics to become destinations people will seek to move to. Just as travel choices will likely be more strongly influenced by health considerations, we may see those acquiring alternative residence or citizenship placing a greater emphasis on a country's health policies when deciding where to reside."

Dr. Juerg Steffen, CEO of Henley & Partners, says the growing demand for additional residence and citizenship options comes as no surprise. "We have seen extraordinary upheaval over the past few months, with many certainties falling away. For investors and their families, having a second citizenship or an alternative residence is an even more precious asset than ever before, as concerns over access to first-rate healthcare, global mobility, and quality of life take on a new urgency. In turn, investment migration programs provide invaluable economic security to the countries that offer them. As we enter the worst recession since the Great Depression, a small country like Montenegro, for instance, is better equipped to weather the storm. The recently launched Montenegro Citizenship-by-Investment Program provides permanent access and the right to stay in this beautiful and safe European country. It also provides the country with an immediate liquidity injection of much needed debt-free foreign capital that can be used to buffer the impact of the pandemic and create significant societal value."