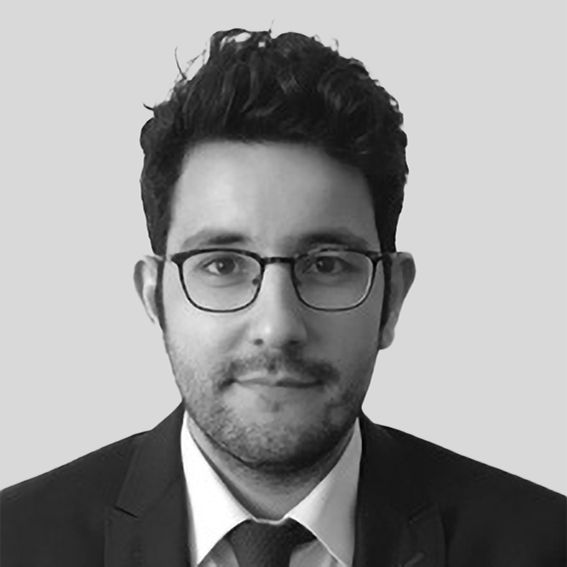 Dr. Omer Zarpli is a researcher based in the USA. 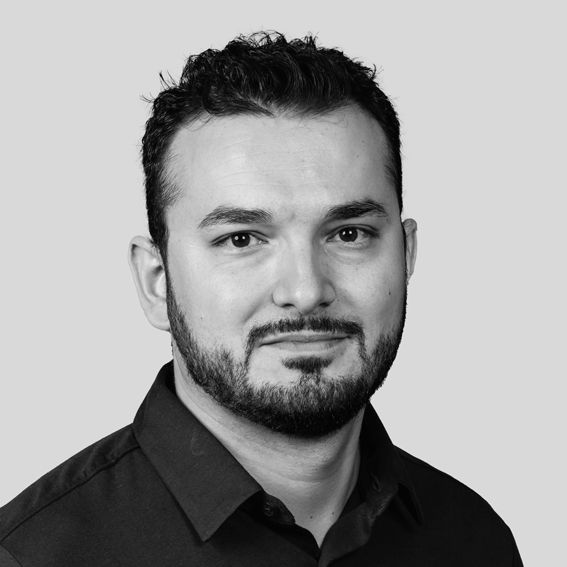 Ugur Altundal is a Visiting Research Fellow at Brown University

Over the past decade and a half, travel freedom has expanded significantly. According to historical data from the Henley Passport Index, a ranking of all the world’s passports according to the number of destinations their holders can access without a prior visa, which is based on exclusive data from the International Air Transport Association, in 2006 an individual could, on average, visit 57 countries without a short-term visa. Today that number has risen to 107. But this overall increase masks an enormous divide between countries in the global north and those in the global south. For example, citizens of Japan, Sweden, and the USA can visit more than 180 countries without a visa. On the other hand, citizens of Angola, Cameroon, and Laos can visit only about 50. This disparity can be seen in Figure 1, which shows the difference in visa scores between 2006 and 2021 across five major regions.

When looking at countries within these regions, some nations have been exceedingly effective in increasing their number of visa-free destinations (See Figure 2). For example, citizens of the UAE could visit only 35 countries in 2006, whereas they can now visit 175 states without applying for a visa. Bolivia, on the other hand, has lost four visa-free destinations. How can such variations be explained? 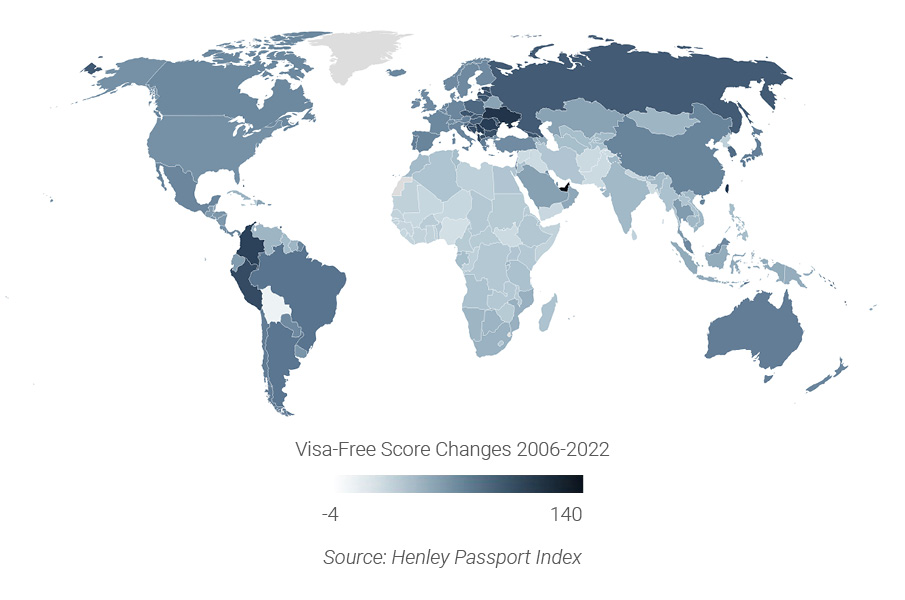 There are several factors which influence a country’s passport strength. The first is income. Countries that have higher gross domestic product (GDP) per capita according to World Bank data also enjoy more visa-free destinations. Figure 3 shows that citizens of low- and lower middle-income countries enjoy access to substantially fewer visa-free destinations than upper middle- and high-income countries. This pattern can be explained by two interrelated factors. Firstly, countries are more willing to open up their borders to citizens from wealthier countries because doing so is likely to pay greater economic dividends in the form of trade, tourism, and investment. Secondly, individuals from wealthier nations are less likely to place a burden on the host country’s social and economic system, for example, through the cost of unauthorized migration. Individuals from countries with high levels of poverty and economic instability, on the other hand, are considered as posing a high risk for overstaying their visas. For instance, owing to economic concerns about visa overstay, the USA removed Argentina and Uruguay from its visa waiver program in the early 2000s. Figure 3 demonstrates the role of income in explaining why some countries added more new visa-free destinations than others between 2006 and 2020. 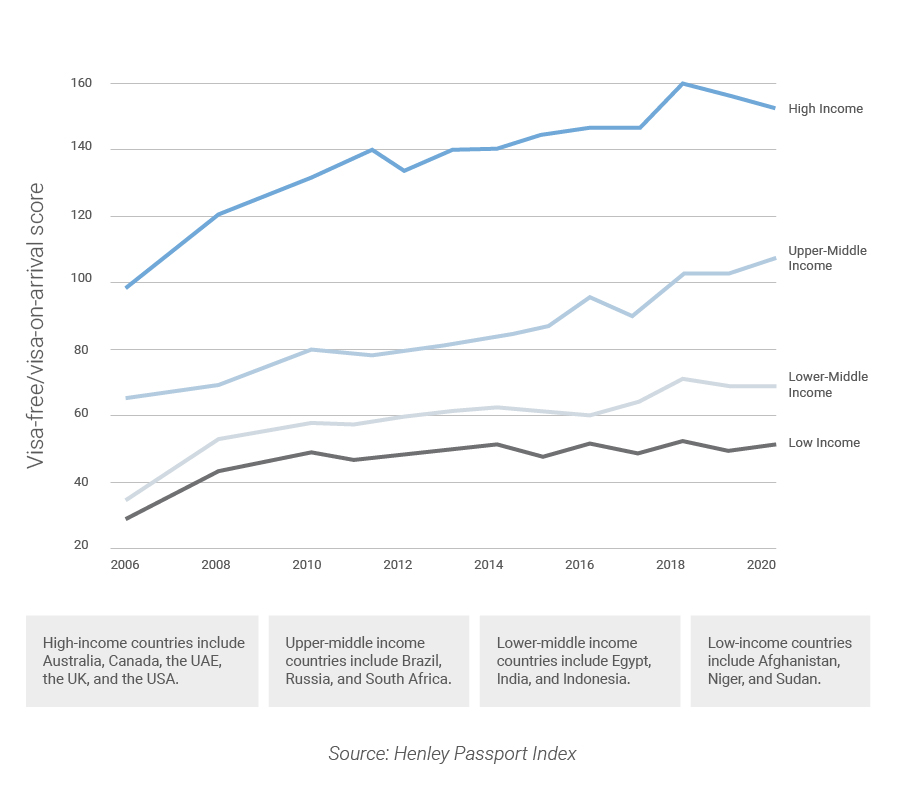 Figure 3 displays the increase in visa scores over time across four income groups. As the graph illustrates, the increase in visa-free scores among low- and lower-middle-income countries seems substantially lower. Yet, it is puzzling that countries that have increased their visa-free destinations the most are not necessarily the wealthiest nations. The countries with the highest increases are mostly middle-income countries in Eastern Europe (such as Romania and Ukraine) and the Americas (such as Colombia and Peru). However, this does not mean that income is not an important factor in the differential growth of passport strength. Figure 4 shows that countries with higher GDP per capita have higher success rates in gaining new visa-free destinations (calculated by taking the ratio of actual new visa-free destinations to the potential destinations in 2006. For example, in 2006, the US citizens could potentially gain visa-free access to 70 destinations (200-130=70). By 2020, the USA had gained 55 visa-free destinations, yielding a success rate of approximately 78% (55/70)). However, there are notable exceptions to this trend, including Qatar, and Saudi Arabia. The reason the richest countries are not the biggest risers is that they had higher visa-free scores to begin with, leaving less room for growth. For example, the USA had visa-free access to 130 destinations in 2006, leaving only about 70 destinations for which US citizens were required to obtain a visa in advance. Accounting for this original score reveals that income is indeed a robust predictor of differential increase in visa-waivers. 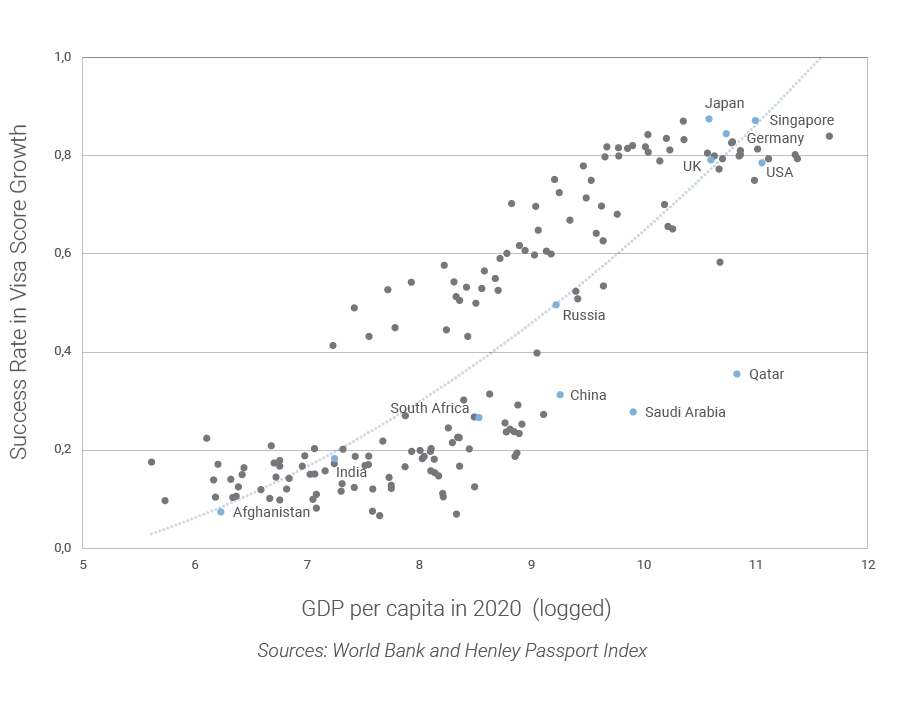 Figure 4. Country success rate in visa score growth according to GDP per capita

Increased fragility has a similarly significant effect on ease of travel as income, though in the opposite direction. What is domestic fragility? One of the primary indicators is the level of violence in a country, measured by bombings, terrorist attacks, ethnic conflict, and organized crime. Other indicators include factors such as elite factionalization, state legitimacy, and the size of an internally displaced population. According to our analysis based on the Henley Passport Index and the Fragile States Index generated by The Fund for Peace, countries that are more fragile are less likely to have higher levels of travel freedom (see Figure 5). The most likely explanation is that these countries fall into the high-risk category for security, asylum, and overstay. As a result, countries such as Somalia, South Sudan, and Syria have some of the lowest visa-free scores. There are, however, exceptions. Venezuela, a country that has been embroiled in civil strife since the disputed 2018 presidential elections, enjoys a relatively high visa-free score. On the other hand, certain significantly more stable countries such as Oman and Mongolia have low visa-free scores, as seen in Figure 5. 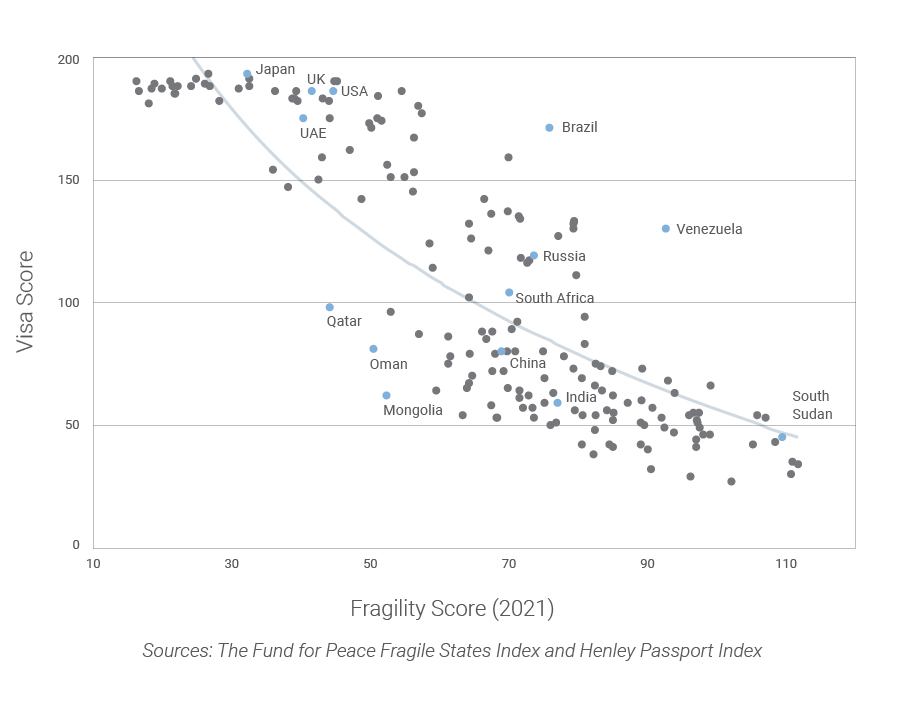 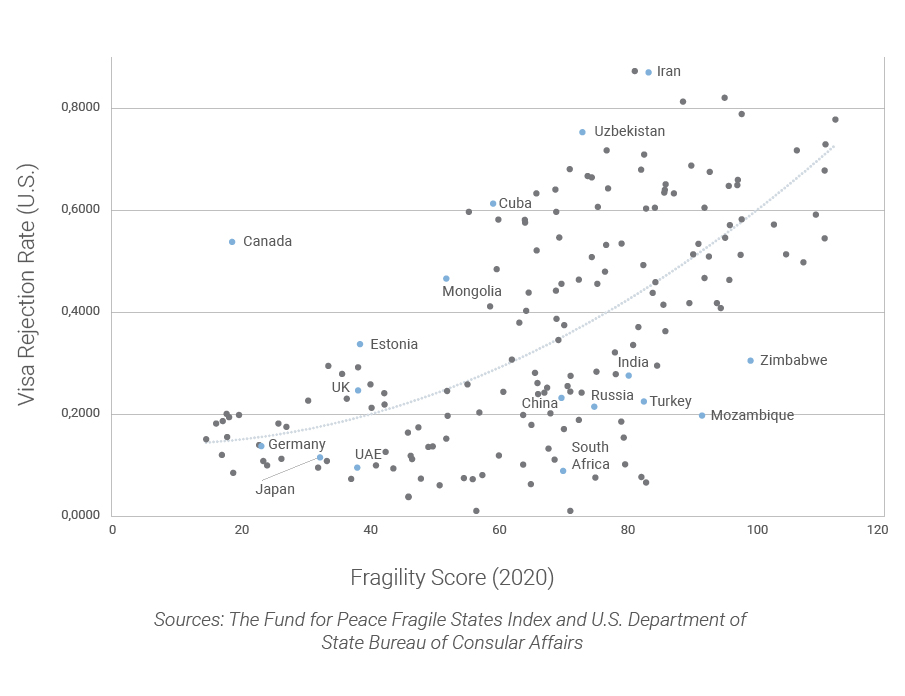 Figure 6. Visa rejection rate by the USA according to fragility score

Democracy not a strong predictor of global mobility

Finally, what about democracy? Has it played a pivotal role in spurring an increase in visa-free scores? It does not appear so. Analyzing the data collected by the Varieties of Democracy (V-Dem) project at the University of Gothenburg in Sweden, the form of government does not have as strong a correlation with passport strength as other factors. It is true that democratic countries, on average, are able to gain visa-free access to a greater number of destinations than their authoritarian counterparts. For example, while the average visa-free score of democracies in 2020 was 133, it was 83 for countries with non-democratic governments. However, Figure 7 shows that while democracies on average have higher visa-free scores, both democracies and authoritarian regimes have increased their visa-free scores since 2006 at somewhat similar rates. 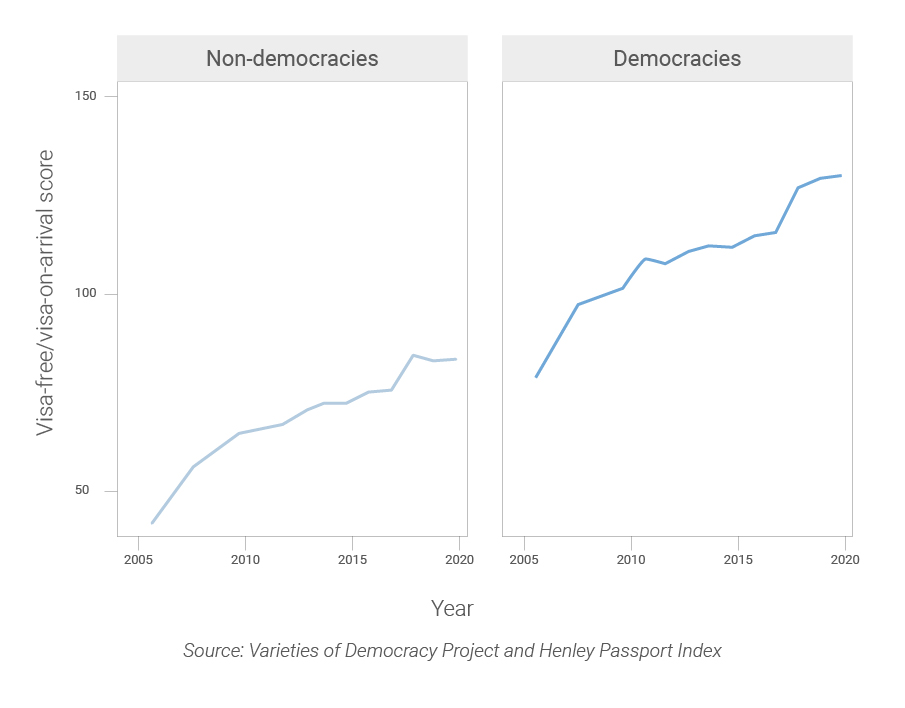 It is also important to note that there are numerous outliers that do not fit the pattern. For example, citizens of the UAE, a closed autocracy that does not allow for competitive elections, can visit 175 countries without needing a visa in advance. Malaysia and Singapore also have extremely high visa scores, despite their moderate levels of democracy. In contrast, some countries with high democracy scores, such as Armenia, Senegal, and Tunisia have very limited visa-free access. This suggests that the relationship between democracy and passport strength is not linear, which can be seen by outliers on the scatter graph in Figure 8. 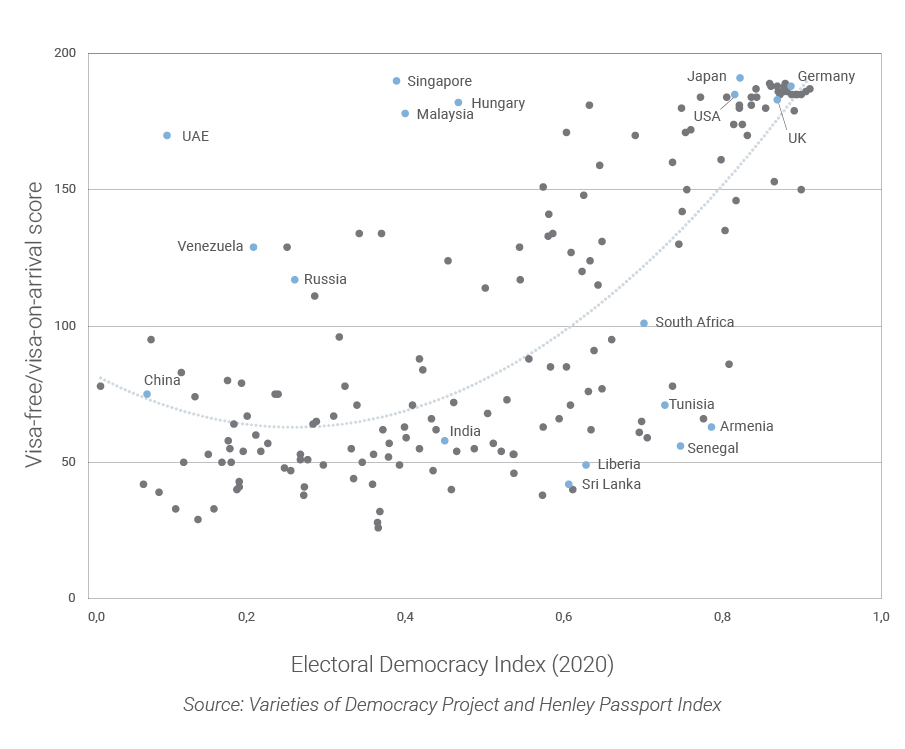 Figure 8. Visa-free destinations according to democracy score in 2020

While most countries have increased their visa-free access since 2006, some regions and nations have performed significantly better than others. By analyzing global trends during this period, it is apparent that upper-middle- and high-income countries have achieved visa-free access to most countries. With noticeable exceptions, citizens of lower middle- and low-income countries, and countries with higher fragility scores, enjoy far less travel freedom because they are deemed as being high-risk for security, asylum, and overstay. It is unfortunate that individuals who need international mobility the most, owing to political persecution and poverty, are the ones who lack travel freedom and are denied visas to wealthy and stable countries.