Citizenship Membership: Why States Should Behave as Clubs 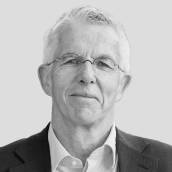 Prof. Dr. Straubhaar is Professor of Economics at the University of Hamburg, Hamburg/Germany.

‘Citizenship’ of a state is equal to ‘membership’ of a club. In the same way as clubs do, states distinguish between those who are ‘in’ and those who are ‘out’ — ‘us’ and ‘them’. Both also impose obligations on the insiders, and grant rights to them too — rights that are not granted to outsiders. Therefore, both clubs and states create economic value for those ‘in’, in such a way that this value is not shared for free or without compensation with those ‘out’. Having operated in a way similar to clubs, it follows that, when it comes to optimizing membership, states should continue to behave like clubs.

Nevertheless, the procedure that transforms an outsider to an insider or makes them ‘one of us’ differs fundamentally between states and clubs. Those called ‘citizens’ belong to a particular state, while ‘members’ belong to private clubs. For this reason, the rules of access for ‘citizens’ are a matter of public (national) law, while membership of clubs is governed largely by the rules of the club — by private law. As Kaelin says, “Citizenship is either connected with a person’s birth — either based on the citizenship of the parents (ius sanguinis or citizenship by descent) or birthplace (ius soli, citizenship by birth, or birthright citizenship) or derived through marriage, naturalization or acquired through conferral.”

Membership of a club, however, can be obtained in simpler ways, driven by economic rationality rather than political emotions: through entrance payments, membership fees, appeal, guarantees, mediation, on request or by application. Within the framework of private law, reflections on economic cost-benefit play a much more important role than in the public law setting of citizenship (where emotional, normative, political, or cultural arguments might be of greater importance).

Clubs are obliged to select their members according to economic criteria. They must be attractive and stay that way in order for both old and new members to raise sufficient income to finance the running of the club. If a club fails and is unable to cover its costs through its income, it becomes illiquid, insolvent and may finally have to cease operations altogether. States, however, survive and endure — even if they accumulate a mountain of debt, and independent of whether their citizens become unhappy or dissatisfied with life in that state.

But why should states not consider, after analysis, utilizing insights that could be gleaned from club membership, and applying these to their benefit in the way they structure state citizenship? Both clubs and states have as their central purpose to provide common goods and services for their members or citizens. These goods and services are of a type that individuals alone cannot (or would not like to) produce for themselves — either because producing them is characterized by economies of scale or because producing them is subject to externalities. (See Box 1 for the classification of goods and services.) Like clubs, states compete for members. To do so, they must establish attractive public facilities to attract and keep mobile people as taxpayers. They must produce a bundle of common goods that they then offer to their citizens for fees and direct payments. National governments must efficiently (i.e., with the lowest reasonable cost) produce and offer those public goods that are demanded by the majority of their citizens (namely, voters for national governments).

In any event, the current members of the ‘club’ should charge the newcomers an entrance fee. Belonging to a community or state has a definite value. ‘Membership’ or citizenship allows members access to the common inventory of public (‘club’) goods, as well as to traditions, norms, and laws. Some of these may have been established in the past through hard political struggle, but some may have been formed in a gradual social process. Accordingly, even if the current marginal cost of sharing the club good were to be zero, access and participation should not be given free of charge to non-members or to new members. Instead, the acquisition of membership is subject to strict rules.

Anyone who is newly persuaded by the club analogy will be able to recognize the basic features of an optimal migration policy. It is simply a question of who is enabled, under what conditions, to use national ‘club’ goods, and to have a say in national ‘club’ policy. In this way, controversial points of discussion can be settled with the following basic ideas:

Box 1: The economics of clubs

Economic Club Theory was originally developed by Nobel Prize-winners James Buchanan and Paul Samuelson. To understand their ideas, it is helpful to classify goods (and, of course, services) according to two specific characteristics: excludability, and exclusivity (or rivalry).

Excludability refers to the ability (or lack thereof) to restrict access to the consumption of certain goods (and services) to some, many, or all people. A lack of excludability might lead to a situation where consumers cannot be directly charged for their use of certain goods and services, and the utility, or benefits, they derive from them. The existence of ‘free rides’ — the fact that people may be able to benefit from goods without paying for them — may make all people reluctant to pay. In consequence, goods and services with a low degree of excludability might not be produced and offered at all. Low or no incentives to supply certain goods and services can lead to a ‘tragedy of the commons’ — when goods and services that would be beneficial, from a macroeconomic evaluation, are not produced because of microeconomic incentives. To overcome this ‘prisoners’ dilemma,’ people may establish clubs, states, or other common institutions.

In contrast, exclusivity (or rivalry) refers to the degree to which a person can use goods and services without diminishing the ability of others to use them. The slice of bread a person is eating may no longer be eaten by others. However, a swimming pool may be enjoyed and used by many people simultaneously before externalities occur (such as capacity restrictions because of congestion) that reduce the joy of swimming for some or even all people in the pool.

Figure 1. Classification of goods according to excludability and exclusivity 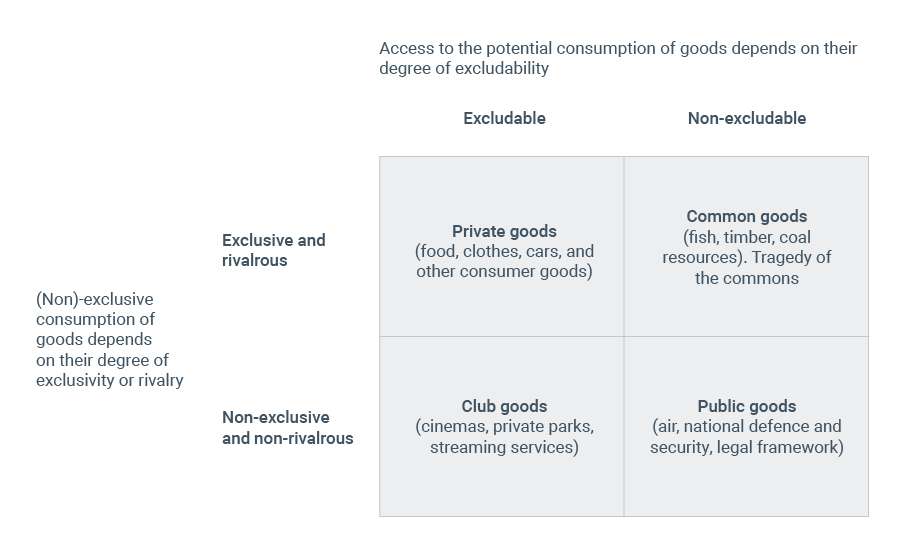 As Figure 1 shows, the characteristics of excludability and exclusivity (or rivalry) allow all goods and services to be classified into four categories: private, common, club, or public goods. Club goods are distinguished from private goods by their general non-rivalry in consumption within a specific capacity (in this regard, they are like public goods). However, after the capacity has been reached, they might be subject to congestion costs. In contrast to public goods (and like private goods), individuals (non-members) may be excluded from the consumption of club goods. A successful club will try to maximize the happiness (due to utility, profits, income) per capita of club members.

Box 2: The example of a tennis club

A tennis club may illustrate the search for an optimal club strategy. Not all people can or want to afford the luxury of their own tennis court. Therefore, they jointly build and operate a tennis facility. The club members must collectively finance the operation and maintenance of the tennis facility. They must set club policy rules and develop an optimal club strategy. Who is required to make what contribution and in what form? What rights and benefits may they claim in return? What is the optimal size of the club — how many members should be accepted before applicants are turned away?

As a result, special rules apply to the acquisition of club membership. New members are only admitted if the ‘benefit’ to the club of accepting them is greater than the ‘burden’ they impose on current members. ‘Benefits’ may be of a direct financial nature — such as admission or annual fees, or of a purely intangible nature — such as when people of high public standing or with promising tennis skills join, thus exerting a pull on others to join (because they would like to be part of a successful, celebrity tennis club, or one that is desirable for other reasons. ‘Burdens’ arise for the current members if they experience longer waiting times for the use of the tennis courts, or if the club culture undergoes negative change because of the new members. For example, the age structure, the gender proportions, the number of smokers vs non-smokers, the preponderance of beer-drinkers, the dress code, the elite of the club who are accustomed to holding the championship trophy — all these may be shaken or changed. In short, the familiar club life, the well-established club rules, but also the internal power relations, are all put to the test by new members.

How do the current members react to the changes caused by new members? The reactions depend crucially on the state of the tennis club. A young club with beautiful, little-used tennis courts, few members, and correspondingly high annual fees will probably be relatively open to those new members who are willing and able to pay, if only for economic reasons. In this case, each new member would lower the average annual fee for the current members — without causing long queues for the facilities. Young clubs with no reputation at all might even give away memberships for free or set fees for new members that barely cover the variable costs. On the other hand, highly renowned, prestigious clubs that already have many prominent members (even famous players) will be more reserved towards new admissions. Similarly, clubs will be less welcoming to new members if their current members have uniform ideas about club rules, and fear that the internal peace or balance of power may be threatened by new members.

It is certainly true that states were not only established because individuals voluntarily joined together to produce and use a ‘club good’ together. There are, of course, political reasons, military and political power, and cultural, social, and ethnological factors that may have been much more important. It is equally true that states do not produce just one single ‘club’ good, but a whole bundle of different services and goods. Ultimately, however, these references to the historical genesis of a state, and to the complexity of the state-building process, are only reservations about the club analogy. In essence, people agree on the common rules of the game, which they then call a constitution, a basic law, or a legal system. They are prepared to finance common public goods and services (such as security and stability, transport infrastructure, medical care, and education) through their taxes and levies. And they carefully guard who is a citizen, who may become one, and who should remain excluded.

In summary, states will increasingly face questions like those faced by clubs. Belonging to a state as a citizen or belonging to a club as a member is a valuable asset. Citizenship, therefore, is not given to new members for free. The acquisition of citizenship is, rather, subject to strict rules — even in a liberal setting of globalizing economies. The strategy of optimizing access to citizenship according to club membership rules and charging new citizens a ‘club’ entrance fee according to a simple cost-benefit analysis, brings about the economic implementation of the legal concept ius doni — the acquisition of citizenship by investment.