Ghaffur joined the Greater Manchester Police in 1974 and rose through the ranks, reaching the rank of superintendent, and transferring to Leicestershire Constabulary in 1989. After reaching the rank of deputy chief constable at Lancashire Constabulary, he transferred to the Metropolitan Police Service in 1999 as a deputy assistant commissioner and in 2000 served as Borough Commander of the City of Westminster. In 2001, he was promoted to Assistant Commissioner, and headed three of the Metropolitan Police’s Operational Command Units. He is currently dean of the London Community College of Education. 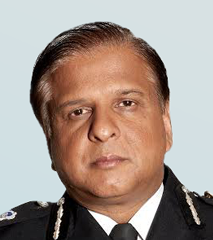