Created in 2014 by the firm’s Chairman, Dr. Christian H. Kaelin, the Global Citizen Award is a unique international tribute that honors remarkable individuals working at local level to advance one of the global challenges affecting humanity today. 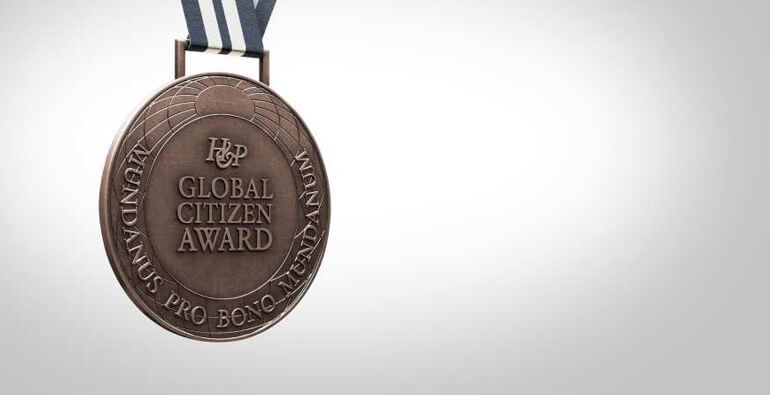 Princess Firyal is a humanitarian, patriot, and philanthropist. She has been a UNESCO Goodwill Ambassador since 1992, working in particular on the protection of world heritage, medical research, and children’s education. In 2005, she was appointed a Global Education Ambassador. The princess also serves on the Board of Directors of the United Nations Association and is a member of the Board of Trustees of the International Rescue Committee for Refugees (IRC).

Marie-Louise Coleiro Preca was the ninth and youngest president of Malta, a role she assumed after being active in politics for forty years and serving in parliament for sixteen years. Former president Coleiro Preca established a number of entities, including the President’s Foundation for the Wellbeing of Society, which nurtures dialogue and fosters a culture of positive peace, as well as the President’s Trust and the Emanuele Cancer Research Foundation. Former president Coleiro Preca is an active member of the Patron’s Council of ‘Missing Children Europe’, the Council of World Women Leaders, and the Women Political Leaders Global Forum Advisory Board. She is also Special Ambassador of the International Year of Sustainable Tourism for Development .

Dr. Christian H. Kaelin, TEP, IMCM, Chairman of Henley & Partners, is considered one of the world’s foremost experts in investment migration and citizenship-by-investment, a field he pioneered. Holding master’s and PhD degrees in law from the University of Zurich, he is a sought-after speaker and advises governments and international organizations. He is the author, co-author, or editor of many publications, including standard works such as the Global Residence and Citizenship Handbook, the Henley & Partners – Kochenov Quality of Nationality Index, and the Switzerland Business & Investment Handbook.

Prof. Dr. Khalid Koser OBE, Executive Director of GCERF, Vice-Chairman of the Advisory Council on Migration, World Economic Forum, Geneva, and Member of the Board of the Andan Foundation

Dr. Khalid Koser is Executive Director of the Global Community Engagement and Resilience Fund. Dr. Koser is also Non-Resident Senior Fellow in Foreign Policy Studies at the Brookings Institution, Associate Fellow at Chatham House, Research Associate at the Graduate Institute of International and Development Studies in Geneva, Non-Resident Fellow at the Lowy Institute in Sydney, and extraordinary Professor in Conflict, Peace and Security in the Faculty of Humanities and Sciences at the University of Maastricht.

Jim Rogers is an author, financial commentator, adventurer, and international investor. After attending Yale University and Oxford University, he co-founded the Quantum Fund, a global investment partnership. Rogers served as a professor of finance at the Columbia University Graduate School of Business and as the moderator of WCBS’s ‘The Dreyfus Roundtable’ and FNN’s ‘The Profit Motive with Jim Rogers’. Rogers has frequently been featured in and contributed to top global media outlets. He has written several books including a chronicle of his 100,000-mile motorcycle journey across six continents, where he analyzed the countries through which he traveled for investment ideas.

Namira Salim is the Founder and Executive Chairperson of Space Trust, a social enterprise that engages world leaders to utilize space as the new frontier towards Space2030, in support of the 2030 UN Sustainable Development Agenda. Salim holds a master’s degree in International Affairs from Columbia University and has served as Honorary Ambassador of Tourism for Pakistan and as First Honorary Consul of Pakistan to Monaco. She is also renowned as the first Pakistani to have reached the North and South Poles in 2007/2008, the first Asian to skydive (tandem) over Mount Everest, and the first future space tourist from South Asia and Monaco aboard Sir Richard Branson’s Virgin Galactic. Salim was decorated with a Medal of Excellence by the president of Pakistan in 2011.

Dr. Marek Urban is Deputy Dean of the Faculty of Philosophy at the Pontifical University of John Paul II in Krakow, Poland, which offers graduate degrees in theology, philosophy, and church history. Dr. Urban lectures on the history of modern philosophy and has contributed to many books, publications, and articles. He also has a long-standing association with Henley & Partners’ humanitarian initiatives and has, on various occasions, supported the firm’s activities in this regard.