Gaston Browne is the 4th and current Prime Minister of Antigua and Barbuda, in office since 2014. He led the Antigua Labour Party to victory in the June 2014 general election.

Browne was appointed to the position of Commercial Banking Manager in the Swiss American Banking Group, having served for many years in the Group, which was a major banking consortium in Antigua and Barbuda, comprising offshore and onshore banks and a trust company. In 1999, Browne answered an obvious call to promote the welfare of his fellow citizens by entering the political arena. He was duly appointed as the Parliamentary Representative for the Constituency of St. John's City West. His outstanding dedication and commitment to service and distinguished credentials in the field of finance propelled him to the portfolio of Minister of Planning, Trade, Industry, Commerce and Public Service Affairs in his very first term as an MP.

Gaston attended the City Banking College in the United Kingdom, where he gained a first degree in banking and later pursued studies at the University of Manchester, he earning an MBA in Finance.

Gaston Browne led the Antigua Labour Party to victory in the 12 June 2014 general election, after 10 years in opposition, winning 14 out of 17 seats. Browne was sworn in as Prime Minister on 13 June 2014. 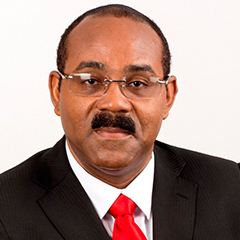