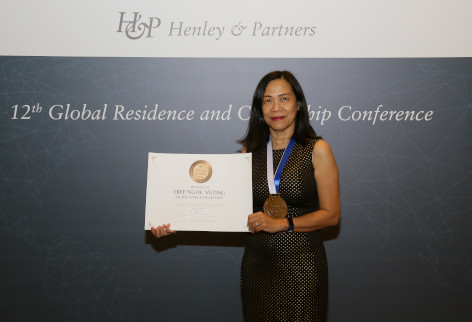 Diep N. Vuong, Co-Founder and President of Pacific Links Foundation, received the 2018 Henley & Partners Global Citizen Award in recognition of her courageous, longstanding international campaigning for the rights of those enslaved by human trafficking, as well as her grassroots work in protecting those rescued from such enslavement.

Vuong’s commitment to this cause is born out of her own harrowing experience fleeing Vietnam with her brother and father as a young teenager. It took 17 years for her family to be reunited in the USA. As a former refugee and stateless person who went on to graduate from Harvard University, Vuong has dedicated her life to helping those most affected by global inequality and its pernicious effects.

Under Vuong’s leadership, the Pacific Links Foundation has grown into one of the leading organizations in Southeast Asia working to prevent the trafficking of men, women, and youths within and out of Vietnam. The foundation runs a comprehensive range of effective counter-trafficking initiatives that include education for at-risk women, youth leadership and empowerment training, and the Factory Awareness to Counter Trafficking (FACT) campaign, which works with multinational corporations to reduce forced labor and trafficking risks within their supply chain.

Protective measures focus on the reintegration, rehabilitation, and upskilling of trafficking. Vuong and her team tirelessly serve and protect communities in Vietnam’s Mekong Delta, along the northern, central, and southern borders of the country, and in industrial zones, providing vocational and educational opportunities, safe housing, and healthcare services to at-risk youth and trafficking survivors. 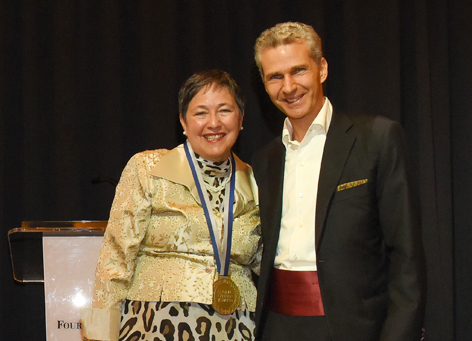 In 2017, the Global Citizen Award honored Monique Morrow: humanitarian, technological pioneer, and co-founder of The Humanized Internet. The Humanized Internet project focuses on the 1.1 billion individuals, of which 230 million are children under the age of five who have lost their legal identity as a result of involuntary displacement or who have been denied an identity and rendered stateless by their governments. Without government-issued documentation, these individuals are invisibilized and excluded from society and its institutions, which makes them especially vulnerable to human trafficking and abuse.

Morrow’s organization works tirelessly to empower these dispossessed groups with a virtual identity — a digital set of their marriage, birth, education, health care, and other essential records — that they can access any time, through any mobile device. This ground-breaking approach shifts identity-ownership away from NGOs and other intermediaries and into the hands of the refugees or asylum-seekers themselves.

“Monique Morrow’s remarkable work at the intersection of technology and human rights makes her an exceptionally worthy recipient of this year’s award,” says Paola de Leo, Head of Group Philanthropy at Henley & Partners. “The Humanized Internet is a demonstration of how the incredible advances and innovations in technology today can be used to improve the plight of the world’s most vulnerable people. Morrow is paving the way for more open and sustainable systems of governance and identity, and she deserves this year’s award unequivocally. Henley & Partners is committed to working with Morrow to promote the global cause of refugees, which has become the primary focus of our social investment.” 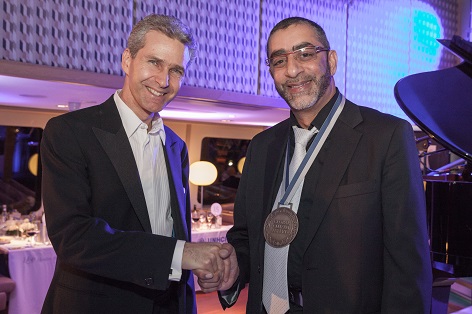 In 2016, the Global Citizen Award honored humanitarian and founder of Gift of the Givers Foundation, Dr. Imtiaz Sooliman. Since the start of the foundation in August 1992, Dr. Sooliman has grown the Gift of the Givers into Africa’s largest disaster relief organization. Today, the organization has a team of 200 individuals that provide medical assistance, equipment, supplies, high energy and protein supplements, food, and water to millions of people each year.

The award recognizes not only the humanitarian efforts of this African NGO but also its drive for cutting-edge innovation and invention. The Gift of the Givers Foundation designed and developed the world’s first and only containerized hospital comprising 28 units, as well as the world’s first groundnut-soya high energy and protein supplement that is used in the treatment of severe malnutrition, HIV/AIDS, TB, cancer, and other life-threatening and debilitating conditions. The foundation additionally established Africa’s largest open source computer lab.

During the largest refugee emergency in history, Dr. Sooliman started working internationally and brought the foundation’s relief efforts to Syria and Turkey. He has erected two hospitals in Syria and is now running a program to upgrade and transfer skills to doctors, nurses, and other medical personnel. By acknowledging the significant work being done by this African NGO internationally, Henley & Partners also wants to highlight the contribution to the global community by a region that is often seen exclusively as a mere recipient of international aid. 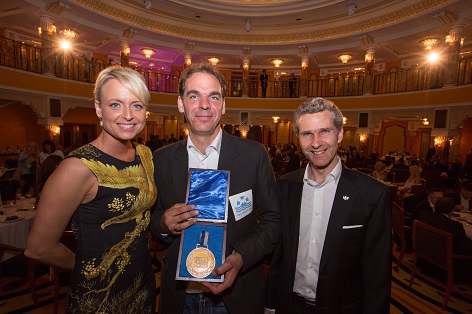 In 2015, the Global Citizen Award honored Harald Höppner’s courage and individual initiative at the time of the most dramatic refugee crisis in the Mediterranean Sea. Born to a family of doctors in East Berlin, Höppner dropped out of university when the Berlin Wall was demolished in November 1989 in order to travel the world. He then started a successful business selling exotic furniture, jewelry, clothing, and artistic craftwork from India, Thailand, Nepal, and Indonesia.

In November 2014, at the onset of the Mediterranean refugee crisis and following a terrible accident where 366 refugees’ lives were lost when a boat capsized near the island of Lampedusa, Höppner, together with his colleague Matthias Kuhnt, purchased a century-old fishing boat and began patrolling the Mediterranean Sea.

In June 2015, after nearly six months of planning, preparation, and renovations, the boat — now named Sea Watch — was equipped with first aid kits, drinking water, life boats, and satellite phones. Sea Watch began providing rescue efforts and first aid to refugees off the Libyan coast, rescuing 600 people on its first mission alone. The organization has since grown significantly with the help of numerous volunteers dedicated to saving as many people as possible from distress at sea. Sea Watch was able to rescue over 5,000 souls in 2015 alone.